Apples, pears and related fruit belong to the sub-family pomoideae (also called pome fruit) within the plant family Rosaceae, a.k.a. the rose family—that’s right, apples are related to roses!

Apples originated in Central Asia, where they were first domesticated between 4000 and 10,000 years ago; there are now over 8,000 varieties of apples grown throughout the world (in fact, there are more varieties of apples than of any other fruit!), with 80 million tons of apples produced per year. Apples have been depicted in art, especially as religious symbols, for nearly as long as they have been cultivated.

While apples and pears don’t have particularly impressive Nutrivore Scores, they are linked to reduced risk of cardiovascular disease, type 2 diabetes, and all-cause mortality (a general indicator of health and longevity). For example, a 2017 meta-analysis showed that the people who ate the most apples and pears had an 18% reduced risk of developing type 2 diabetes compared to people who never ate apples or pears. The authors calculated the dose response and showed that for every serving of apples or pears we consume per week, we reduce risk of type 2 diabetes by 3%! The health benefits of apple family fruit can largely be attributed to their high polyphenol content, including anthocyanins, quercetin, epicatechins, procyanidins, dihydrochalcones (super cool polyphenols that apples are the only concentrated source in the human diet), chlorogenic acid plus triterpenes, fiber and more!

Observational studies have shown that apple consumption significantly lowers the risk of cardiovascular disease mortality, stroke, type 2 diabetes, and all-cause mortality. Randomized controlled trials have likewise shown that apple consumption can significantly reduce BMI. In one study of postmenopausal women, eating 75 grams per day of dried apple (equivalent to about two medium fresh apples) for a year straight resulted in a 1.5 kg weight loss, significantly lowered total cholesterol and LDL cholesterol (by 13% and 24%, respectively), and lowered C-reactive protein levels (a marker of inflammation).

Apples have also been associated with a reduced risk of certain cancers. In particular, extracts from organic Gala apple peels can reduce the survival of prostate cancer cells and breast cancer cells, while increasing a tumor suppressor protein called maspin that negatively regulates metastasis, cell invasion, and angiogenesis. A case-control study found that apple intake (one or more servings per day) was significantly associated with a reduced risk of colorectal cancer (a 63% reduced risk!). In vitro, apple extract (rich in phenolic compounds) has also been shown to protect against key stages of carcinogenesis in colon cells, including protecting against DNA damage and inhibiting invasion. Because so much of the polyphenol and fiber content of apples are concentrated in their skin, it’s important to eat these fruits unpeeled—and also to consume them whole, rather than juiced! 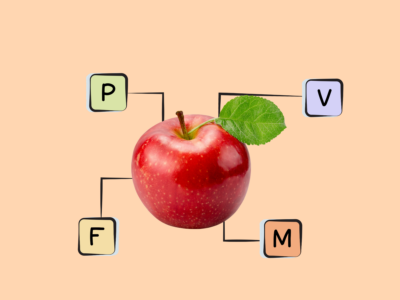